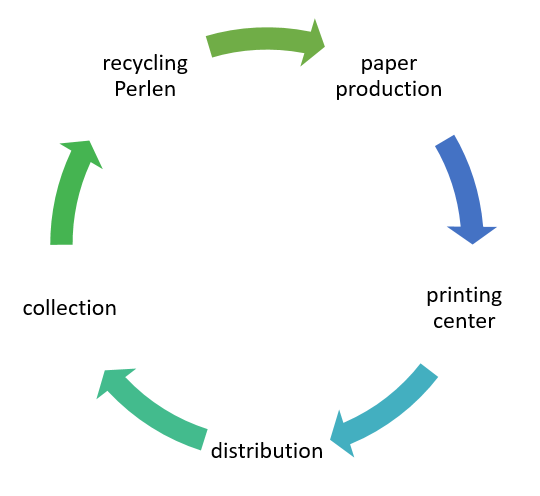 The printing center get the paper from the swiss company Perlen Papier AG. Every day 3 trains with 4 cabins arrive by the company Tamedia, in general that are 50 pieces of paper rolls with a length of 33km. They use this paper directly to print the newspaper. In one second 9m of paper were printed by the machines. In fact, they produce 90’000 copies per day without interrupting. They use only 4 colours to create al paints.

Finally, when the newspaper is ready to distribute they bring it to 460 boxes in canton Zürich. The Newspaper 20 minute have to be already early in the morning in these boxes. It is important that every commuter can take one to read on his way to work.

The next step is not controlled by Tamedia. The SBB set up various containers to collect the old newspapers. Per week they gain about 20 tonnes of paper in Zürich. SBB Employers take the waste from the various containers out and give it Perlen Papier AG.

The Life cycle of the newspaper

Paper: local raw materials (Wood/waste-paper), economical use of energy, reusability, ecological awarded with the FSC Certificate, Paper is produced with 90% of waste-paper and 10% of new manufactured paper. up ↑

Water: To produce paper they need water. They have an own hydroelectric power station to make their own electricity. up ↑

Fibers: Waste-paper from the region, Forest Wood and wood chips up ↑

Transport: The printing center has an own train station, where the paper arrives. In that case, they minimize their CO2 emission. In 2015 they saved about 318 t CO2-Emissions. up ↑

Printing System: The newspaper is printed with the offset printing process. (picture) Per 1000 pages it needs 0.7 Kilowatt. The whole printing center needs about 650’000 – 750’000 Kilowatt per month. The printing center Tamedia has to works with energy regulations from the federal government, because of the agreement with the «Energy agency of the economy». That means they have to save energy in every possible way. up ↑

Water: The water is heated up in a boiler. They save energy, while they heat the water only for the time they really need it. up ↑

Warmth: The warmth which is automatically produced during the printing process, is used to heat the whole building. up ↑

Colour: They use only 4 colours which are named Cyan, Magenta, Yellow and Black. With different combinations they can mix every colour. They are a member of the IFRA Colour Quality Club – top printer of the world. Normally the printing centre use nearly 742 tonnes colour per year. up ↑

Energy: The printing center has a solar system on their house roof. However, the energy which is produced with the solar pannels is almost used after 4 days. up ↑

Paper: The paper is produced from the company Perlen Papier AG. They produce different types of paper, it depends on the end product. In 2015 the printing center used 45’892.75 t FSC-paper for printing. up ↑

Transport: The manufactured newspapers are delivered with LKW’s in 460 Boxes (canton Zurich). The CO2 Emissions are compensated with the organisation myclimate. With this project they support the fuel saving in Brazil. In Brazil, they use FSC-wood waste for generate electricity. up ↑

Information:
Based on the interview with the printing center in Zurich

3 thoughts on “The life cycle of newspapers”