Our scenario is how to protect the environment through riding a bike in different ways. Furthermore, it is also positive for the humans’ health. They are more motivated for the movement when they safe money. No one will make financial benefits, but it is good for our environment and health.

We are looking forward to make more experience in the course of this Project.

Take the bike instead of the car.

Our scenario is to safe more money and protecting the environment in taking the bike to go to work or school instead of taking the car. We took for this the example of Lorena’s way to school.

With the bicycle from Mönchaltorf to the School: 7.4 km in 33 minutes. Cost nothing.

With the car from Mönchaltorf to the school: 8 km in 13 minutes, cost 0.94 Swiss Francs (CHF), CHF 8 for parking and the ordinary wear from the car. Normally, the cost is calculated with additional costs for running a car included (car taxes, repair costs, etc.) Normally, it is one uses of CHF 0.70 per km. Then it would cost CHF 5.60
Spritkostenrechner (autoscout24.de)

The advantage with the car is you are 20 minutes faster, that means you can sleep longer in the morning. The disadvantage is that the cost and the stress level is higher (to find a parking spot).

Produce the energy for a toaster through riding a bicycle

Our scenario is that the people in Wetzikon start to produce their energy for their domestic appliances by their own by riding a bike. They have to ride the bike so that the connected machine start to work.

We have written an email on the 09.04.2018 to the experts of the Electric Company of Canton Zurich (EKZ, Elektrizitätswerke des Kantons Zürich, ekz.ch) to find out if it is possible. The energy consultation replied us and sent this interesting video which explains everything:

We found out that it is impossible for untrained people to produce enough energy to make all the domestic appliances work. In the video an Olympic cyclist tries to make a toaster heat up. For him it is just a few seconds possible to produce 700 Watt which are needed to get the bread toasted. To sum up, we can say that we underestimated the fact how much effort is needed to produce enough energy for domestic appliances.

Our scenario is to produce energy by riding a bike which will be saved in a battery. Afterwards you can use the saved energy for the houses in Uster. As a result, you have less electricity costs. To find out if that is possible we wrote another email on 16.04.2018 to the EKZ experts.

Through the information of the EKZ experts we found out that it is possible and it works in the same way as the solar panels on the roof. To save the produced energy a battery is needed. And you can connect this battery to your house. The disadvantage is for filling up 4,5 kW battery it will take a lot of time and effort, like you can see also in the video.

Here a picture of a connected bicycle. 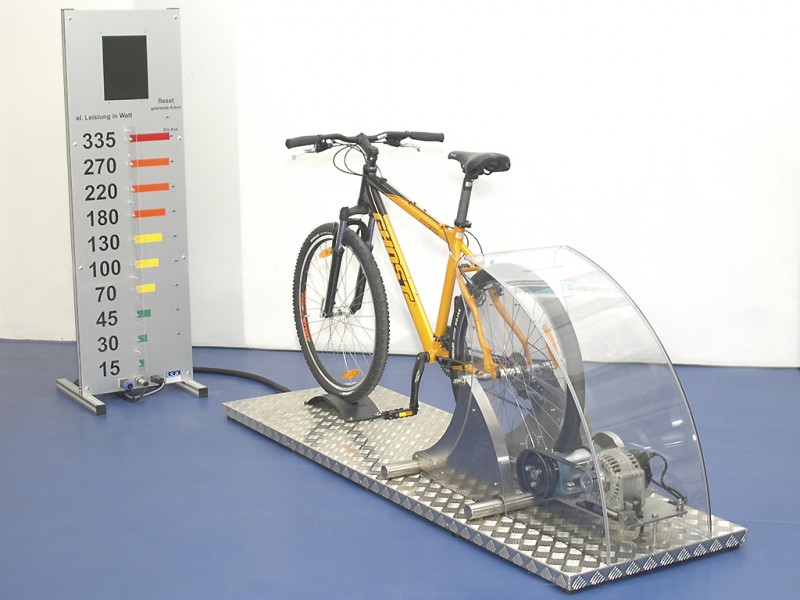 The conclusion of our scenarios

First of all we thought that it is simple to produce enough energy for the whole electricity of the house by riding a bicycle which is connected to a battery. Through the help from the EKZ experts we realized that it is impossible to make an exact calculation on this scenario. For this reason we made the calculation in scenario 1. Furthermore, we discovered that it would take too much effort and time to produce the needed energy to run a household. Because of this problems we wanted to show our scenario in three different types. For us it was interesting to learn and realize how much energy a human needs to live.

2 thoughts on “Protecting nature by bike”