Let’s imagine, there is a huge wall surrounding Zurich city. Only e-cars are allowed to pass the barriers to get into the town. In the picture below the red line shows the wall.

The Swiss Federal Statistical Office (Bundesamt für Statistik) and the road traffic licensing department (Strassenverkehrsamt) Zurich did not have the data we were looking for.

Then Mrs. Suter had some useful information for us. She talked to Mr. Knapp from the “Dienstabteilung Verkehr Stadt Zürich” (stadt-zuerich.ch) on the phone. He told her that the average amount of cars which circulate in and out of Zurich city is about 555’000 cars per day. Please take in account that this data is only from Monday to Friday.

To have something to calculate with we used google maps to calculate the route from Leimbach to Affoltern. We used this route because Leimbach is in the south of Zurich and Affoltern is in the north. The fastest route is 13.7 km long (Source: google.ch/maps).

The last thing we have to find out is the CO2 emissions a car produced. On bfs.admin.ch we found information about average emissions of cars in 2016. An average new passenger car produces about 134 g CO2 per 1 km (2016).

What would happen if only electric cars could drive through Zurich city? (speculation from our group)

There would probably be less traffic because some people won’t get an e-car. Therefore, the only vehicles on the street would be e-cars, e-busses and trams. If a lot of people want to take public transportation, more e-busses and trams will have to drive. However, this would not mean that the traffic will rise again because more people can fit into a bus or a tram.

How will the people react to the new system? (no survey done, just our guesses)

At first a lot of people will complain about the new system. Due to the high prices of e-cars at the moment some people won’t be able to buy an e-car. This would be good for the environment because the production of those cars causes a lot of CO2 (see our question below) but this could also lead to problems for everyone who is dependent on their cars because they might need it for their commutation to and from work. Another problem could be that they live somewhere that is only reachable by car or by foot.

On the other hand, some people might not care about it because they already have an e-car or they use public transportation. Anyway, everyone will have to deal with it and accept it.

How much greenhouse gases can be saved without the fuel-powered cars?

Unfortunately, the production of e-cars causes a lot of CO2. Referred to focus.de the production of batteries could be much more damaging for the environment than people assumed. By the manufacturing per kilowatt-hour store capacity are round 150 to 200 kilo carbon dioxide equivalent developed. For the battery of a Tesla Model S that would mean 17.5 tons CO2. Furthermore, in the article they also say that you would have to drive at least for eight years with an e-cars so that it would be worthwhile for the manufacturing.

So, from the thousands of tons of CO2 that could be avoided each day you would have to subtract 17.5 tons CO2 for every production of a battery.

Another aspect that would shrink the amount of avoided CO2 emissions is if you also look at the recharge of the batteries. If you charge the car with nuclear power then this pollutes the environment as well. 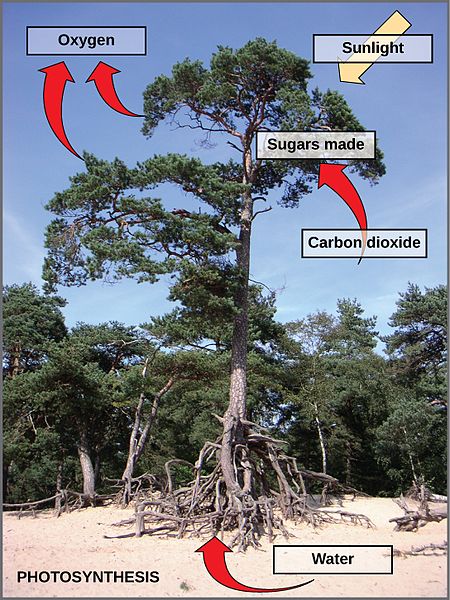 In the picture above, you can see the photosynthesis of a tree. It shows how the tree transforms light energy into chemical energy. Photosynthesis captures energy from sunlight and is then used to convert water, carbon dioxide, and minerals into oxygen.

How many trees do we need to compensate the CO2 emissions produced in the city of Zurich in one year?

Firstly we had the intension to calculate the amount of fuel that could be saved by only letting e-cars driving through Zurich city. But we had to realize that this is quite difficult because every car has a different engine and therefore burns up a different amount of fuel.

What will happen to the automobile industry? (speculation from our group)

The companies that sell e-cars would be more successful because some people still want to have a car on their own and not use any public transportation. Therefore, they will need a new car. The other companies won’t have a chance to sell their cars to anyone who drives in and out of Zurich. They would need to bring up some new innovations.

How would the prices develop? (speculation from our group)

The prices of e-cars might drop a little because the demand would rise. Otherwise the prices could also increase because if there are only a few companies that sell e-cars they won’t have much competitors so they can choose the price themselves. If someone really wants to buy an e-car this person is willing to pay more.

Is it dangerous for pedestrians if only e-cars can drive through Zurich city?

Referred to zeit.de the silence of e-cars can be dangerous for the road safety. This leads to a new rule: all new e-cars in the future will need a technology that creates sound. With this step the NHTSA wants to avoid round 2’400 accidents of pedestrians.

For more information about e-cars and their advantages and disadvantages you can also check out this video: The Pros and Cons of Electric Vehicles / YouTube.com

One thought on “Zurich city without fuel-powered cars”