is a big and known problem in Africa. But also in Switzerland we have more and more heat, dryness in summer as well as disappearing of glaciers and less of snow. So the water reserves in Switzerland are getting smaller and smaller.

That is why it could be that we are going to have only one ski resort in Switzerland in the future because of the little snow we have. Can you imagine a situation like that? But all the artificial snow we always need is a big consume of water.

So that we are getting seasonal water shortages is predictable. With our post we want to call attention on that problem and as well we give information about our actual usage of water.

Currently, each person in the city of Zurich consumes around 1’120 liters of  water per week. This is such a huge number – isn’t it? Below we calculated the number of liters per person per week multiplied by the Zurich’s population.

For our scenario we thought that it would be interesting to do research on what would be if we can reduce our water usage on 500 litres of water per week. What would be the consequences of this experiment? What dis- and advantages could be the result? How much money can be saved and what about the environment? Maybe it might be also a support against the conflict with the climate change.

Imagine – you just have 500 liters of water per week, for which things would you use it and where would you look maybe for another option or would you even completely relinquish using water?

Mentioned below, we exemplify some examples with 500 liters of water a week. The data below is based on the mean water usage per person. 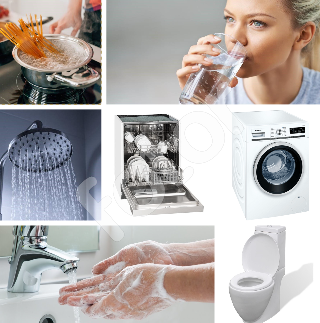 Team water supply: From where is the highest amount of sewerage?
Mr. Daniel Pfund: from the city of Zurich (household, industry, rainfall)

Are there any changes in the past few years relating to the water consumption?
There is no change in the consumer behavior, but there is an increase concerning the number of inhabitants in the city of    Zurich. (ca. + 30’000)

Are there any challenges / side effects?
If there falls a lot of rain the sewage works is highly challenged, but there is an separate basin to safe all the rainwater. Because of the cleaning of the water there is in addition a lot of Methane, but we use this for the required energy of the sewage works.

In addition, Mr. Daniel Pfund sent us a video link where we can see how the sewage works cleans the water. So if you are interested in that you can check out the following video:

We hope you enjoyed reading our article!
Team Zurich: Lara, Sven and Nicole

3 thoughts on “Does the population of Zurich waste too much water?”