How we got to know about power-to-gas?

We created a short clip. If you are interested, here is a short overview of how we produced the video ↓

Why is power-to-gas needed?

First of all, power-to-gas aims to store the renewable energy and not to produce energy. The research is based on the expectation that the renewable energy will be the only, or the largest energy source. The solar energy will probably be the most beneficial. Thus, it gains more energy in summer and less in winter. But how is the difference going to be compensated? It was found out that power-to-gas could be the solution for this problem.

Regarding the bar graph by HSR given above, the difference between November and June will increase over time and it will allow the possibility to provide constantly enough energy. Hence, fossil fuels will not be needed to achieve this. (Source: HSR – Technical University Rapperswil, Switzerland)

How does it work?

Power, water (H2O) and carbon dioxide (CO2) are needed to produce methane-gas, which could be used to powering cars or heating. First of all, the chemical reaction of the electrolysis has to be created. Then, the components oxygen (O2) and hydrogen (H2) are used. Generally, Oxygen could be further utilized for other purposes, but there is no use for it in power-to-gas. Furthermore, the hydrogen needs to be connected with CO2. This could be achieved in different ways; One way is to filter it out of the normal air, another possibility would be to use the CO2 from incinerators (Verbrennungsanlagen)  or the reuse of the emitted CO2 from the user of the gas. Then, a chemical process has to be operated to combine hydrogen and carbon dioxide. After this, methane gas is ready to be supplied in the gas distribution system. Finally, the heating and filling stations can distribute the produced methane gas for their consumers.

Is it really a future technology? What is about the CO2 emissions?

Maybe you were thinking about pollution oft he gas. The gas produce CO2 for sure. So is it not eco-friendly? This is a legitimate question. It don’t harm the environment because the CO2 which will be produced by the combustion process, was taken out of the air before to produce the methane. So the most important point for this technology is that the used electricity is from renewable energy source.

The vision for power-to-gas is to use methane if not enough renewable energy can be provided. For example, it would be a good alternative to use hybrid cars. Electricity is better for short-distance rides, but gas is advisable for long journeys. Gas as fuel for cars is nowadays three times more expensive than petrol. But when it becomes more common, the price will decrease. We saw a car like this at the power-to-gas engine in Rapperswil-Jona, Canton of St. Gallen. It would be easy to build up a comprehensive distribution of artificial methane, because it can be transported in the normal natural gas system.

The Power-to-gas progress is the most promising idea in the energy industry. Not only does it provide a much sought-after storage option (gewünschte Speicheroption) for renewable electricity, it can further increase the production of biogas plants and turn CO2 into a usable energy source.

The technology of power-to-gas is mainly financed by research programs of the European Union, private companies and the gas industry (natural gas).

On the 13th of December 2018 we visited the Institute for Energy Technology in Rapperswil-Jona SG. The presentation was held by Ms Moebus. We were additionally led by her through the power-to-gas experimental plan. Unfortunately, we were not allowed to take any pictures inside the facility. However, it was an impressive experience to see the dimensions of the system. We further had the opportunity to fuel a car with the produced gas. Moreover, there are many companies and organizations that support this pilot project, such as Audi AG. Below you will find some pictures, made by ourselves. 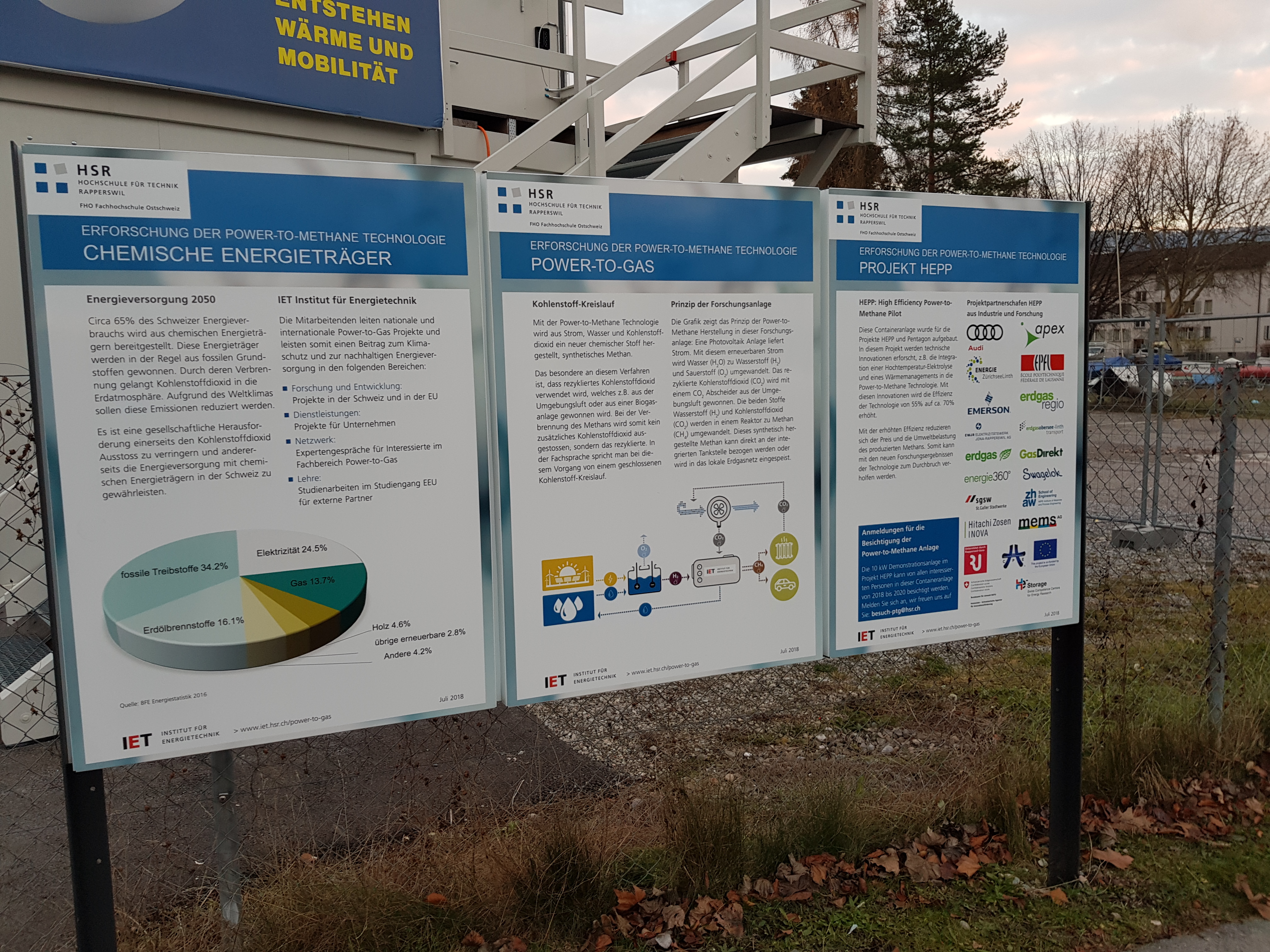 Information board at the power-to-gas engine 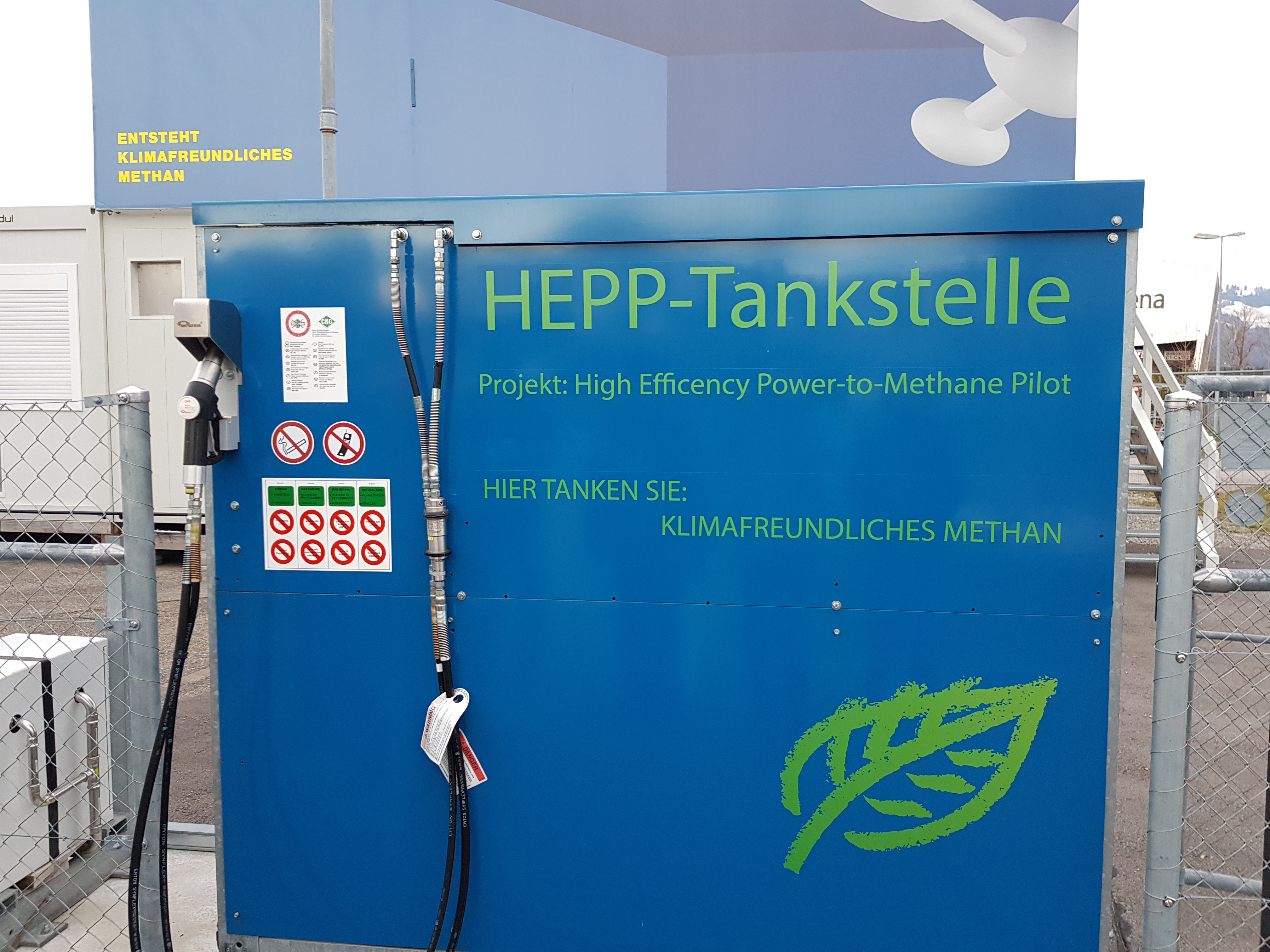 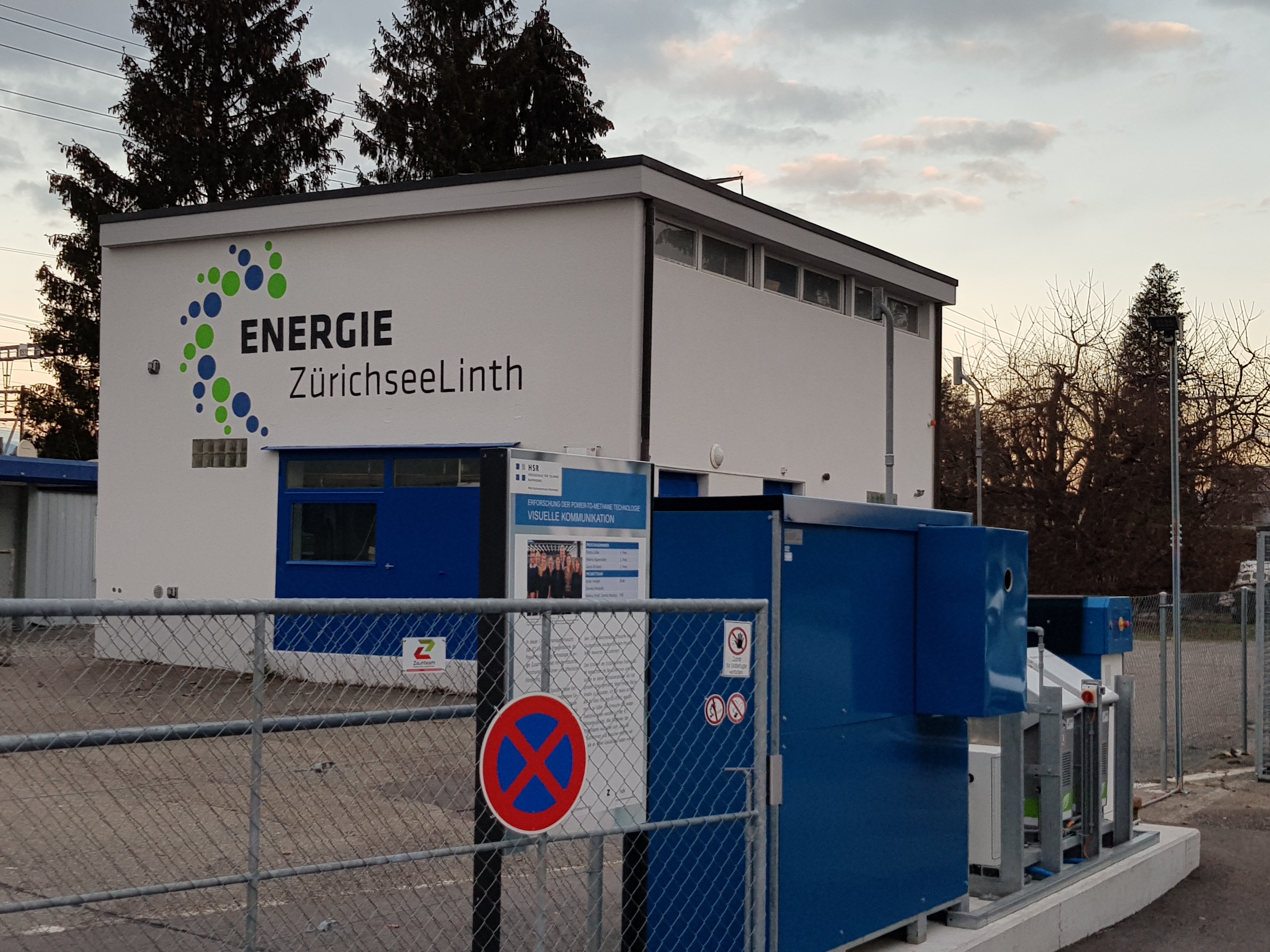 In this project we learned a lot about energy and about the people who are doing research on a technology which maybe will help us in 2030 or something like that. We got to know a part of the big solution for the global warming. One of these details, which should solve the problems which comes with an energy revolution. We did a lot of research and we made something practical with the experiment. It was also a pleasure to visit a real power-to-gas engine in Rapperswil-Jona SG to see the essence of our project with our own eyes. We are convinced that power-to-gas is an important future technology to store renewable energy.

We didn’t find any critical arguments against power-to-gas. Maybe it’s because the scientists are at the beginning of research that we could not find any disadvantages. But we are glad to read your comment if you like to add some critical notes!

up to the video ↑

1. We made brainstorming about, what we would like to show the audience. What should be the output of the video. In our case, we wanted something active, which shows this theoretical process in a simple and interesting way. So we did an experiment.

2. In the next step we planned the video and did a filming schedule which shows the different scenes. You start with the «intro», you continue with the main part in different scenes and the film ends with an «outro».

3. Then we provided all things we needed for our clip. In our case we needed some plastic cups, tracks, water, … It is always very important to have a quiet room with good light. But to improve the quality it’s better to use a spotlight and a microphone (a good sound is crucial).

4. Before you start I would do some tests and controls of the sound and picture and if it stores. When you start filming I would recommend to shoot the most scenes on a stand if possible. It looks much more professional and comfortable for the audience.

5. Use your creativity to do something surprising and entertaining for the audience. Find your way to make the video exciting and informative.

7. Then you just need to upload your video and then you are finished with your video Project.

One thought on “How to store energy? Power-to-gas!”