That we are in the middle of the climate change is no secret. The news all over the world are filled with headlines which tell us that we are not looking into a bright future but what does this mean for Switzerland? We did research concerning the plants in the city of Zurich and this is our result.

Plants and their impact on our environment

Plants are important for almost all organisms because they produce oxygen what we need to live. The definition of plants is not easy. They are living creatures, but not animals or mushrooms. The difference is that plants perform a chemical process called photosynthesis. Most plants are autotrophs, that means they can make their own food if they have light and carbon dioxide (CO2), or in other words they turn radiation energy (light) into chemical energy (energy rich glucose and then starch for storage). [6]

The whole process takes place in the chloroplasts which are part of the plant. These also create the well-known green colour of the plants. [1] [2] [3]

Refers to the change of the climate on the planet Earth caused by humans or naturals. Climate change can both be a cooling or a warming of the climate for a certain period of time.

Reasons for a climate change can be:

Swiss people cause about 4.6 tons of CO2 per person per year. The goal would be only 1 ton per person. [7]

Mister Enz manages the gardeners of the Botanical garden of Zürich (google map) which is owned by the University of Zurich UZH.

On November 13th we had the opportunity to visit him and ask some questions in connection to our project. He was very well prepared, could help and took a lot of time for us. First of all we went for a walk in the botanical garden. There he showed us three trees which are influenced by climate change – the holly oak (Quercus ilex, Stein-Eiche), the cork oak (Quercus suber, Korkeiche) and the laurel (Laurus nobilis, Lorbeer). These trees are all evergreen (immergrün) and grow in the Mediterranean climate. Since the climate in Switzerland has become warmer, these trees from the Mediterranean climate can also survive here. [5]

Here you can see a picture of these trees in the botanical garden which are influenced by the climate change: 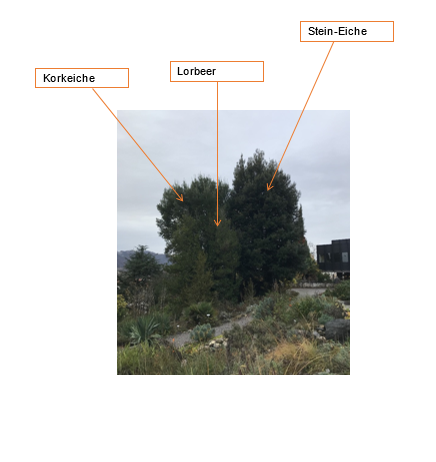 After our walk through the botanic garden, we had the opportunity to ask Mister Enz our prepared questions.

How did the plant world change in the past twenty years in terms of species?

A lot of trees like the beerch (Fagus sylvatica, Buche) which were planted between the 60s and 80s, are now in danger, because of the climate change. They cannot survive these dry summers which more and more become reality in Switzerland. There are replacements which could be planted, like the Turkish hazel (Corylus columa, Baumhasel). They are originally from Turkey and in that country they have to tolerate long and dry summers.
There hasn’t been a dramatic number of extinctions of trees and other plant species, but in the long-term they will not survive the winters and summers in Switzerland, if the climate continues to change this way. It also takes a long time until a plant species become extinct. [5]

Did the possibility already occur to plant new species which hadn’t been compatible in our in our climate zone up to now, but are now able to grow here?

There is actually a project which is launched by BOTANICA. To raise awareness, we put together a dossier which explains the topics in a concise way. Every year a new topic is surveyed. The topic for 2021 are “Winners and Looser”, in terms of the native flora. The project lists a few trees which are profiting from the warmer climate and those species that are likely lose. Because of the climate change, some plants, as you realized, are now able to grow in Switzerland. Just recently, I have heard of a farmer who opened a luxury chestnut plantation. That would have been impossible twenty years ago. Kiwis are in the same category. Sub-tropical plants can increasingly be grown here. Some have already been present in Switzerland but you had to protect them from the weather, but these measures are slowly becoming unnecessary. [5]

Which plants are in danger of extinction because of the climate change?

A lot of plants now are able to grow at higher elevations, this means that they move closer to the mountains (the timberline has climbed up to between 2200m and 2400 m above sea level). Plants which are not able to live at these heights will go extinct.
The Prealps currently receive lots of rain. If the climate change causes a reduction of rain, these regions will start getting drier in general and for example marsh plants will go extinct. On the other hand, there are new plants which can grow because of this climate change and they will repress the native plants.
Plants like the wood garlic (Allium ursinum, Bärlauch) have problems too, since the trees in the forest need the water and basically “steal” it from the other plants. This causes that spring geophytes (Frühlingsgeophyten) will go extinct in the long term.
However, in general it can be said that it takes a long time until a plant species goes extinct. But there are also “winners” in the climate change. This refers to plants which now can grow easily in our climate even though they would not have tolerated the climate only a few years ago. [5]

Is there a tendency of the canton and city of Zurich to plant more plants? Is it grant-aided by the canton or the government?

We do not know how many species exist in the city of Zurich. The canton of Zurich however tries to replace the sick trees and takes care of all trees professionally. This way the council ensures a healthy tree population in the city in the long term. In general, the city doesn’t have a wide spectrum of plant species. More variety is found in private gardens.
The Canton Zurich supports nature. Parks are usually grant-aided from the City of Zurich, forests on the other hand by the Canton of Zurich. What differentiates the city from the countryside is that in the countryside, the farmers are grant-aided to conserve the landscape. [5]

Here we have a short recording to show you how the interview with Mr. Enz was…

Why does the city need trees?

For the human body to live comfortably, we would need to keep the global warming as minimal as possible.
It is predicted that between 2060 – 2080 our climate will be same as in Rom nowadays. If the climate change continues in this direction, it is important to have lots of plants in cities. Farmers will also need to overthink their cultivations, because if it starts being warmer and this means that maybe even Asian plants will be able to grow better in our changed climate.

Every crisis brings new chances. It could even be that through the climate change Switzerland could plant more different plants and would need to import less food. [5]

We hope You learnt something new with our article. Thanks for reading!

The authors Aurora and Janine

On-topic posts on dontwastemy.energy
Forests – why are they so important for us?
Biodiversity – The importance of nature for ours all future
The effects of bees and pollinating insects

One thought on “How can plants survive in the climate change?”