When we heard that this year’s befter topic was revolved around food and climate we quickly decided that our project had to be based on food waste, because it is a serious issue for our environment. Approximately one third of all the foods worldwide are being tossed, which leads to immense amounts of greenhouse gas emissions. [1]

Due to the huge impact of food waste we wanted to find a way to minimize the wastage and hopefully contribute towards the healing process of our planet. With this in mind we decided to launch a challenge against food waste. The main aim of our challenge was to document the food wasted or saved for up to five days by as many participants as possible. We created a platform for participants to document each day of their experience.

We officially launched the challenge on the 16th of December 2019 and archived the tool on the 22nd of January 2020.

Aìna and I were full of energy to spread this challenge all over the place and to get as many people as possible to participate, but we had some problems. We uploaded our project everywhere we could. On WhatsApp, Instagram, Facebook, The Horse and even in the mail you could find us. We clearly used various Instagram accounts. We often discussed food waste with our work colleagues and schoolmates and of course made everyone aware of the challenge, but not as many people participated as we had hoped at the beginning. We also wrote to 20min and various climate – influencers but did not get an answer. The search for people who would take part was very hard and difficult. Many only did our little survey, but not the challenge. We had imagined the propaganda to be easier.

It is a pity that we could not win students from India or Belgium for our project idea.

This was certainly our biggest hurdle, which we had to climb. Finally, we had several data entries we could collect and analyze. Even if we did not reach the desired amount, we can be proud to have made a small step forward in not throwing away the food.

We also did an audio pitch for our propagation (by Aìna and Melisa):

At the end of our challenge we had a total of 31 participants. 10 people joined the challenge for two or more days. Even though the numbers of participants are not as high as we would have hoped, we still got promising results!

Our challengers are all from Europe except one, who stated Africa as his origin. 60% of our participants are females, 38% men and one person did not want to specify their gender. We had participants from all ages, the 1-20 age group however, was clearing overruling by 50%.

It was wonderful to see that our challengers did not waste food on most days! 84% of the time, no food was wasted, 16% of the entries reported that they wasted food. This observation is supported by the answer of another question: We asked the participants if they found it difficult or easy to prevent food waste and 85 % of the entries stated that it was very easy and only 15% were struggling to create zero waste. 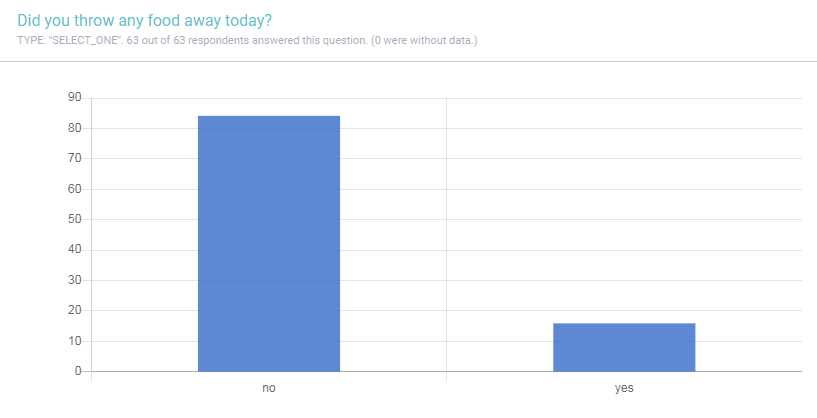 We were very happy about this outcome. However, we believe that those 16% can be further eliminated. In anticipation of solving the wastage problem, we wanted to find out under what conditions the people throw away food. 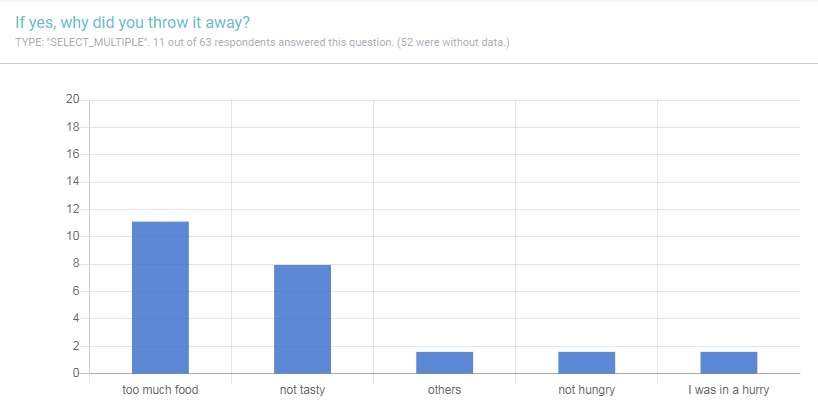 According to our challenge results, the biggest problem was the wrong portion size or that the food was not enjoyable. We are happy to see that stress and lack of hunger were a smaller problem than we anticipated at first.

Before we started our challenge, we conducted a small survey on how people actually behave towards food waste. 79 people took part and were thus able to give us insight into their behavior. 49 of them were women and 30 men. Most of them were from Europe, but also people from India, Africa and South America took part. The result was sometimes very unexpected for us. The majority who took part in this survey were younger than 30. 18 people were older than 31.

75 out of 79 participants answered the first question, whether they buy their food, take it from home or do a combination of both, in the following way: 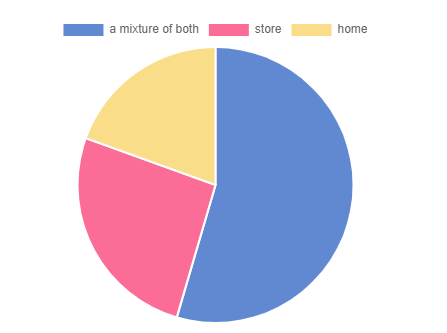 In addition, there was the question of whether they were more inclined to throw food away or save it for later.

We didn’t expect this, but rather thought more people had thrown food away.

Which is very exciting; why people throw food away at all. Which leads to the next question; When you throw food away, for what reason? All of us may have thrown away food for various reasons, here we see the most common ones.

Most throw away food because they didn’t like it (24.05%), which is a great pity because 1 in 7 children don’t get a proper meal a day.

15.19% throw away food because it was too much and they could not have eaten as much. The rest had no container or were not even hungry or too lazy to save the food for later.

Finally, we evaluated whether people are interested in an “End Food Waste-Challenge” at all. Only 12.66% said no, the rest said yes or maybe.

Our goal is not how many candidates we have for the challenge, but that these 79 people have been confronted with food waste.

You can not only improve the climate by throwing away less food, but also your wallet, because if you take it from home and save it for later you don’t have to buy food from the store or restaurant.

Here you can find some pictures of the participants. As we said they documented their food waste. Some of them finished their meal and some did not.

Here you can see some plates that the people finished and some unfinished ones. 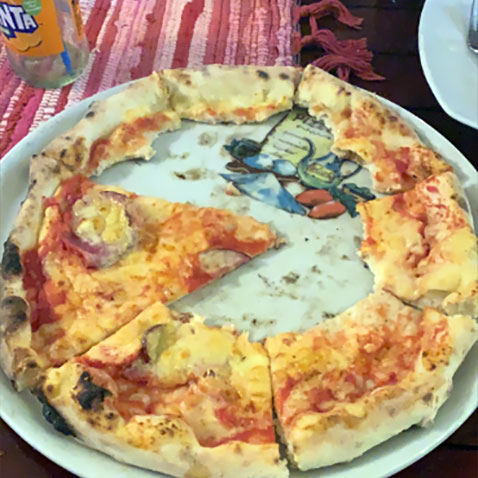 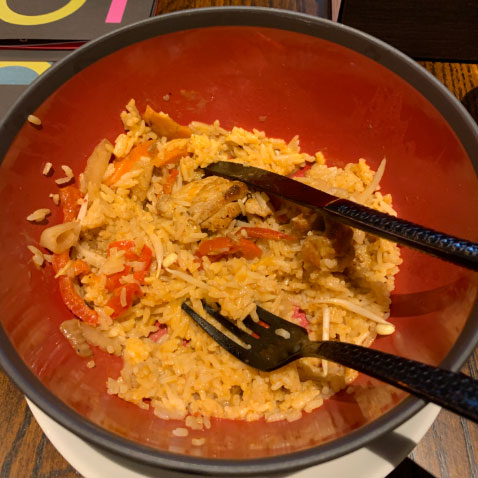 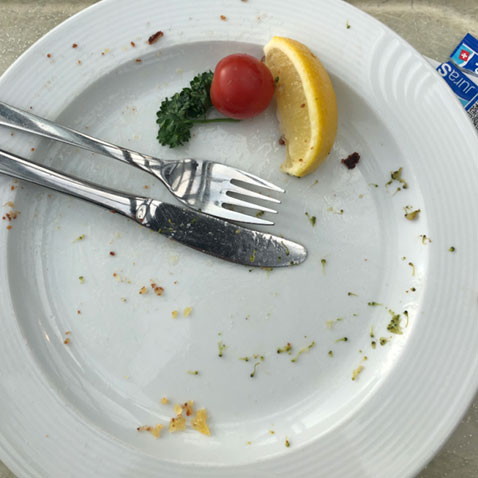 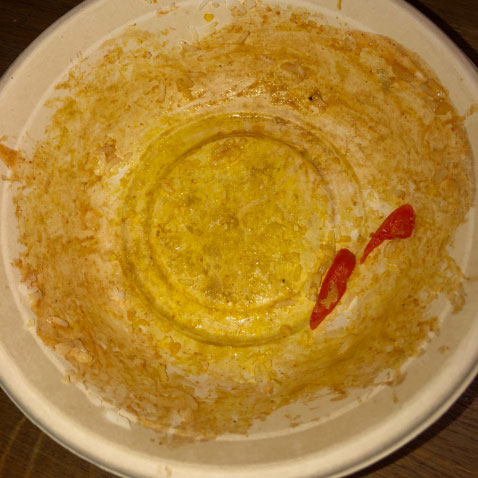 We did an interview with Fabian Pfister. He is the cook of our school cafeteria and gave us some interesting information.

We asked him if food is thrown away?

Unfortunately, he answered yes, but the food is recycled. That means they throw the food into a green bin. This waste is picked up twice a week and used to make biogas.

In addition to this, we questioned if a lot of food is left on the plate and why?

Fabian said that they tend to have little leftovers, so there is also food that is thrown away. But of course, there are also plates that are not eaten. Mostly because the portions were too big, in this respect there is also feedback that it was too much. They always accept this feedback and try not to scoop so much.

We were also interested to know if they ask the customers in advance how big the portion should be?

Fabian said that they don’t do this because the people themselves would say whether they would rather eat more or less.

We also focused on the sandwiches and muesli. We wondered what is done with the packed goods?

Fabian Pfister proudly said that everything is packed in recycled containers and when the expiry date has passed, it also ends up in biogas waste.

We thank Fabian very much for this nice conversation and can be very proud that the Wirtschaftschule KV Wetzikon does not throw away much food and recycles it when it ends up in the garbage.

By evaluating the data above, one can detect that food waste could be easily minimized by several factors. The most common reason why participants threw away food according to the statistics above would have to be due to an overload of food. This problem could be solved by asking for a portion appropriate to your appetite and saving the leftover food for a later meal.

Another highly picked reason was the lack of taste of the food. Participants threw away food they did not like. To reduce that wastage, we would advise to either pick a common tasty meal or ask a friend or colleague if they would not mind swapping the food.

It is save to say that our challenge had a very positive outcome overall and we are pleased with the results. If we continue like this, food waste will hopefully be nonexistent in the future!

When we first imagined the outcome of our project, we expected a lot of participants and therefore a big impact for the environment. As described above this was not quite the case. However, while promoting the project, we realized that another very important aspect of our project was to talk about the issue at hand. Many individuals were not aware of the immense impact that food waste has on our world. Thanks to our promoting we were able to start discussions and raise awareness though that aspect of our project, which we did not take in account at the beginning but turned out to be very rewarding.

Overall, we have profited a lot from our project. We learned about our own wastage habits as well as about the ones from other individuals, about raising awareness and being patient. We are happy with the outcome and would like to thank all of the participants for their commitment and time! We highly appreciate all your efforts. We could not have done this project without you!

All the best,
Melisa and Aìna

Contribution of the collaboration teams from Antwerp:
Counteracting Foodwaste
Say no to food waste

The following link will bring you to a food-waste-app. You can find a local store or restaurant that will throw away the food but its still good and you can buy it for a discounted price:
TooGoodToGo (togoodtogo.ch)

On-topic posts on dontwastemy.energy
Could we nourish the citizens of Zurich with food waste?
Best before, not deadly from

One thought on “End Food Waste – The Challenge”