This article addresses the issue of invasive non-native plants. Invasive plants threaten native plants, can endanger animals and humans, and could become an uncontrollable problem in the future, both ecologically and economically. Their intentional spread by guerilla gardeners is also reviewed in this paper.

Neophytes are non-native plants introduced from foreign places or even foreign continents, which were planted or spread intentionally as well as unintentionally. They can survive the seemingly unfamiliar conditions and can reproduce without human intervention.

Invasive neophytes are less common but depict a hidden and severe threat to our native trees, forests and grasslands, as well as to urban parks and green spaces. They contribute to the decline of biodiversity worldwide and according to International Union for Conservation of Nature (IUCN), are the second largest cause of a decline in biodiversity worldwide, right after the manmade destruction of primeval forests.

At first glance, one percent does not seem exceptionally threatening. However, precaution is advised, because reproduction can explode exponentially. Besides, many of these species can produce thousands up to tens of thousands seeds each year. In addition, these often acquire the ability to reproduce especially quickly.

They deplete the minerals in the soil so that many native species starve, weaken and die. Often these aggressive invasive plants take root in upper layers of soil, which is threatening to our trees, which usually grow deep roots. The root network of the invaders can become so dense that only insufficient amounts of water reach the deep tree roots, and the trees gradually and distressfully dry out.

Some of these species also pose direct threats to human and animal health. The food supply and various infrastructures may also be affected in the long term if the issue is not taken seriously and stricter guidelines and countermeasures are not initiated. Massive economic as well as ecological impacts would be the consequence. [1] [2]

Here you can find our interview a biologist: Interview with Julia Fürst (PDF)

Do you think you know a lot about neophytes?

Maurice Maggi is 65 years old and has been an active guerilla gardener since 1984. [4] 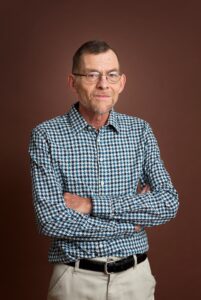 How did you come up with the name “Guerilla Gardener”?
Richard Reynold gave the activity a name in the early 2000. I called it flower graffiti for me.

What was your motivation to start?
To give a face to the small niches in the city where vegetation is possible.

Did you have any role models?
Since there was no Internet in the early days, I had no role models. But I knew that since the resettlement of the people, seeds and plants were taken for homesickness, as food or for healing and benefit.

What do you want to achieve with this?
To give urban nature a place and face. This should delight, surprise and provide habitats and food for animals.

Is there a kind of association of guerilla gardeners? If so, how many members does it have?
There are now many and worldwide associations for urban gardening.

Do you plant plants randomly or do you follow a plan?
I do both. Now I pay more attention to usability for animals and people.

Do you look which plants you plant? What are the most common ones?
In the past, it was mostly hollyhocks / mallows, as they are ideal for my street art. Nowadays, I pay more attention to choosing plants that are native and appropriate for their location.

Have you ever planted a plant that was proven to spread invasively?
Meadow sage reproduces well because it blooms early and has already sown before the first cutting (in mid-June).

Do you have many conflicts with the city of Zurich or with other people in general?
Few

Have you ever received a fine because of your activity as a guerilla gardener?
No

Through our research we have come to the conclusion that neophytes are a potential threat and we as a society need to become aware of this issue before it is too late. Consumers need to be sure when buying and releasing plants that they are not invasive. This would require stricter standards, restrictions and laws to be imposed on nurseries and vendors. Willful spread should also be better regulated and sanctioned.

How can plants survive in the climate change?
Green Roofs –  lively green instead of dull gravel
City Parks and their impact on the enviroment
Green walls for a green City

One thought on “Neophytes – harmless or a hazard?”