Ecological building has been a hotly debated topic for several years now and has often made the headlines. But what really is it? Does it help the environment? Is it efficient? We have also asked ourselves these questions. We chose ecological building as a topic for our collaboration because we have already completed our 3-year apprenticeship in a construction company. Through this, we were confronted with the topic of building on a daily basis. Our family members are also involved in the construction industry. Their fields of work are in different sectors. So, we decided to build on the different levels of knowledge.

Through this collaboration, we conducted two interviews:
One with the construction guide from Alicante, Spain which gave us an insight into the construction methods there, and that the market is booming at the moment. We have received the interview responses in form of audio files.
And the other one with an architect from Switzerland. He introduced us to the different project ideas related to ecological building and also mentioned that no everything is always as easy to implement as it seems. We conducted the interview via phone and incorporated the information gained into the individual sections.

We also conducted an online-survey with participants from Switzerland: The survey helped us to reach young people in particular and to evaluate their readiness for ecological living. Partly we were very surprised about the results / answers.

It is no secret that ecological building is aslo associated with certain costs. It doesn’t always has to be this way, but particular changes to old buildings raise enormous costs. Even small changes contribute to a common goal. It is not necessary to change everything from one day to the next. Even the thought of a change counts.

Important changes / relief can aslo be built in after a property has been built. One of the most widespread system is the solar installation. It can be installed on almost all surfaces without any problems and fed into the power grid. However, the electricity is often only used for the house itself, even though there is far more capacity available. The electricity companies have no interest in installing the necessary devices. The question is why the available resources are not being used. But even supplying the household with “self-produced electricity” reduces the burden on the electricity grid and saves costs.

One of the latest “trends” is to green flat roofs, which not only looks very nice but is also a good contribution to nature. Flat roof greening is regulated in the building and zoning ordinance (Bau und Zonen Verordnung), which varies from municipality to municipality.

Greening is especially important in densely populated areas because it also serves as sound insulation. Insects such as bees find nutrients there. Research has also shown that the life expectancy of a garage roof increases considerably, as the greenery protects against external weather influences. Also, heating does not need to be as strong as it serves as insulation. Green roofs are therefore an enrichment for the house owner as well as for the nature.

Short introduction:
Salvador Dominguez is 43 years old and works as a construction manager at GG Homes Alicante, Spain. He lives with his wife and two children 9 and 12 years old in a house in El Campello. He started his career as a trainee painter, then trained as a bricklayer and went on to further education until he became a construction manager.

Spain pays attention to the use of natural building materials such as wood. In order to build in an ecological and energy-efficient way, it is important to use environmentally friendly materials from climate-neutral production. Due to the extreme climatic conditions, it is important to encourage customers to build sustainably. Nowadays, green building is associated with high costs. However, the opposite is true. In long-term, it is much cheaper and offers a better quality of life. More and more projects like “green housing in Mallorca” are coming up.

What makes a house or flat ecological?

Is the demand for ecological living really increasing?

Because of the Covid-19 pandemic, environmental awareness has come to the fore in conversations across all sectors of the economy, including construction. The health emergency has also increased the importance we place on our homes. New construction in this part of southern Spain is increasingly incorporating green building and the result is sustainable housing with a minimal carbon footprint.

What has to happen so that more people want to build ecologically?

Green technology has advanced by leaps and bounds in recent years. As a result, green building techniques and materials do not necessarily come at a high price. Quite the opposite. In many cases, the cost of construction will be only slightly higher than that of conventional construction with an average of 5% higher. The cost naturally varies depending on the type of material and finishes chosen, but in most cases, green building costs very little more.

We visited a Swiss construction site via facetime

We had the opportunity to visit a Swiss construction site via facetime. Particular attention was paid to fair separation and disposal. The building materials were also calculated very tightly so that as little as possible remained. As we had both already completed our apprenticeship in a construction company, this was not new to us. However, the interior construction is very impressive how the whole living space comes together.

The main goal of the survey was to find out whether people would build / live more ecologically: The survey had 58 participants, it was only conducted in Switzerland. Survey (forms.office.com) 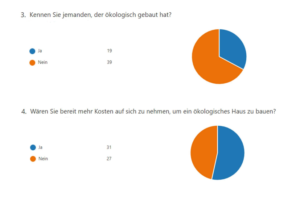 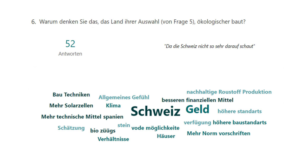 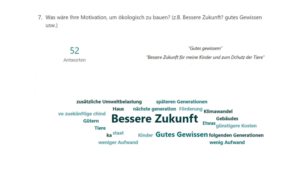 At the beginning we couldn’t imagine much about this kind of project and we also had difficulties getting started. But the given tasks helped us a lot along the way to work something out.

In the beginning, we didn’t have a clear idea of what our project should look like. I think we can also say now that we are not 100% satisfied. We would have liked to know a bit more about the Spanish side. However, the communication with Mr Dominguez was not so easy, but we have learned to communicate across borders. We actually thought that the exchange could not be very difficult for us, as it initially left a very open impression and there was also not much of a time difference. However, we were a little too optimistic because he was slow to get back to us.

We also had to realise that there is always talk of ecological building, but in practice much is still different. The most common type of work is small-scale work such as solar installations. But one can say that ecological building is becoming more and more popular but is still in the start-up phase. On the whole, the work as a group has brought us even closer together. All in all, we are actually happy with the result we achieved, but we are aware that it is somewhat superficial. But to put the whole thing into tangible figures would be a task we would not be able to cope with.

Team-members of our collaboration

Unfortunately, we could not carry out all the collaborations as planned, but we are glad that it worked with some of them.

Content:
The entire test was written by the author.

Revision of the work

Green walls for a green City!

The Effect of building materials on the environment

City Parks and their impact on the environment

One thought on “Ecological building – Spain vs Switzerland”