Nutrition is a very big part of our everyday life. What we eat impacts our health and the environment. Here in Europe vegetarianism and veganism are a big trend. But how many people are actually participating in this trend and what about people living in other parts of the world? This is what we wanted to find out with our project.

To find out we reached out to people all over the world with a survey and conducted an interview with a Korean family. The results were very impressive. To find out read our post!

Celia: «I am very interested in Nutrition and since I am a vegetarian myself I thought why not do a project about it?»

Alina: «I once lived in Korea with a Korean family. The food they eat is very different from what we eat in Europe, and that always fascinated me. I was very happy that they agreed to work with us.»

We are going to:

A Vegetarian diet is primarily based on not eating meat. But there are many different levels of a vegetarian diet, for example a flexitarian can eat meat but the amount is lowered to a minimum.

Vegan is very similar to vegetarianisms because they also don’t eat meat or seafood, but it is way more intense. The reason behind that is because vegan people don’t eat products which are made from any animals for example all kinds of milk products, honey and so on.

Audio recording with a vegetarian

It is a short podcast between the two of us. Since one of us is a vegetarian and the other knows nothing about such a lifestyle, we asked ourselves some questions that could also be exciting for other people.

Interview with a vegan

Since the podcast is only from the point of view of a vegetarian, we have set out to find a vegan in our circle of friends. Josh Anderegg, who has been a vegan for over 1 year now, has agreed to answer the same questions. Unfortunately, we could not meet and therefore conducted this interview via WhatsApp.

What does it mean to be a vegan?

Not eating or consuming animal products consciously. Or at least trying to minimize your dependency on them.

Isn’t it challenging for you?

The only challenging part is when other people get involved, e.g. if you try to eat at a restaurant with friends and the restaurant doesn’t offer a vegan option, or if your family wont cook something vegan at a family gathering, or if you have military service due and there’s no vegan option. As long as I’m fully in control of what I eat it’s not an issue at all.

Why did you choose to became vegan?

Health reasons, less of an environmental impact and less support for a corrupt industry branch (e.g. diary and meat industries)

Why aren’t you vegetarian?

Basically answered in 3. Diary and egg products are just as threatening to your health, just as damaging to the environment and just as corrupt industries like the meat industry. I don’t really care about the conditions of animals, but if someone does and decides to eat vegetarian so no animal is killed it’s not really consequential either. You just hold the animals hostage, force breed them and abuse them instead of killing them, I don’t really see how a vegetarian diet would improve their condition by abstaining from meat products.

Do you think your vegan lifestyle helps the enviroment? Why? Why not? In which way?

produce less of a carbon footprint than animal products (even if you factor in transportation costs), usually they produce less water pollution and they also need less land to be produced. The “why not” can be broken down to the fact that a lot of essential vegan resources (such as protein from soy) can’t be produced everywhere on the globe and therefore have to be transported to Europe from Brazil or West Africa, which of course needs energy, most of the time in the form of fossil fuels. It is up for debate if beef locally produced in Switzerland produces less of a carbon imprint than an avocado grown in Brazil. I’d say no, but it depends on the calculation and which factors are brought into the equation though.

In this gallery you can find various food labels. If you pay attention while buying your food you will recognise them. 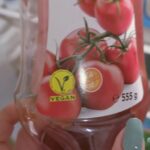 The Vegan label on a bottle of Ketchup 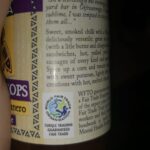 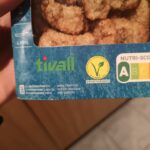 The Vegetarian label on a package of nuggets 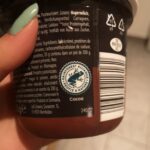 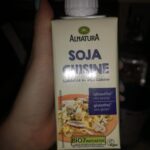 On this package you can see that it’s lactose free, gluten free, it has a vegan label on it and the label of the BIO7 Initiative. The BIO7 Initaitive takes up the values and production methods of organic farming. 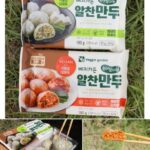 These are some Vegan/Vegetarian products from Korea 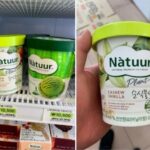 Plant based Ice cream from Korea 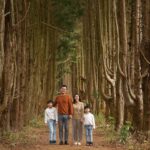 The Korean host family from Zimmi and our interview partners.

Interview with a Korean

In this interview we talk to the Korean Hong Hyun-Ai (My Hostmother for 19 weeks as I learned the Korean language). She is a mother of two boys and has a loving husband. Her family lives in Seoul, the capital of South Korea. We asked her some questions about vegan/vegetarian.

Do you know what vegetarian / vegan is?

Do you know the difference between the tow?

Vegan is one of the types of vegetarians, and they eat only plant foods, rejecting meat and fish, as well as foods obtained from animals such as milk, animal eggs and honey.

Do you pay attention to eating vegetarien / vegan?

It is not often seen in Korea, so it is interesting to look at it.

How common is veganism / vegetarism in Korea?

I searched all my family, relatives, and co-workers, but no one was found. It is still not common in Korea.

Do you have have vegetarian / vegan products in Korea?

Food for vegetarians is on the rise in convenience stores. For example, dumplings, kimbap, hamburgers, etc.

Would you trie to go vegatarien or vegan for 1 week? Why? / Why not? Which?

One week is a short time for health, so I’m thinking of giving it a try.

Do you have in Korea many different labels?

We have some labels, but not many, because it’s so rare for a Korean to be vegan/vegetarian.

This audio is for those who are interested in what the Korean language sounds like. Here are all the answers to the questions above.

In the last question the people were asked on what labels they pay attention when buying food. The most named labels were Bio and FairTrade.

Vegetarian vs. Vegan – The way we eat (PDF)

This brings us to the end of our post. We have learned a lot through this work, especially that these life styles make a big difference in life. You have to be really sure to take such a path.

We also learned through this project that not every country and their people are interested in these life choices, which you could see in the interview with the Korean woman.

Is living vegan better for our environment?

The impact on climate by food

3 thoughts on “Vegetarian vs Vegan – The way we eat”