In this project, we would like to report about some materials that are often used for making a watch. For us it is noticeable that many people are not aware of where the materials come from and what impacts they have on the environment. We hope to provide a better overview.

The first pocket watch was created in the 15th century. Over the years, the technique could be refined so that the watches had bursts on a wrist. At the First World War, the wristwatches came out and they became popular in the 20th century. Today, a lot of people wear a watch because they are affordable for everyone.
Mechanism and components of a watch chronological all have a clockwork, which must be very precisely tuned and consists of many individual, very small parts. Depending on the price category of watches, these parts are made of different materials. The most common used material is stainless steel. However, more expensive models are often used in silver, gold or platinum. To make the watches even more luxurious they are often equipped with precious stones. The wristbands of the watches are mostly made of stainless steel or leather.

Some Materials of a Watch

A watch is one of the most solid jewellery which exist. In addition to this, it is also one of the widely spread tools to read the time. The watches are very popular and nearly everyone has one. There is a big variety of watches, some are very expensive and there are also very cheap ones. In our project we want to show with an example of a watch which materials are included and what their origin is. Therefore we chose the “Chronograph Breitling Navitimer Airborne”.

We picked this model because it is an expensive one which contains a lot of different and especially high-quality materials. 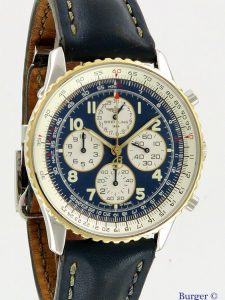 The watch has an automatic movement which is equipped with rubies. The watch case consists of stainless steel, gold and has sapphire glass to protect the watch face. The watch strap is made out of shark or calf leather. Below we describe the different materials of this watch.

Stainless steel:
The stainless steel is made of iron ore which is expanded with nickel and chrome. This makes it resistant against moisture and acid. To have a perfect corrosion resistance the steel has to be treated with a perfect heat.

China is the most important producer of iron. They produced 691’410 tonnes of iron in 2015 which is four times more than the whole of Europe. In general there is a very large stock of iron in Asia.

Stainless steel is to 100% recyclable and can be melted after use. So it is possible to create something new. [1][2]

Gold:
The gold that is needed for the watch industry often comes from South America. Switzerland plays a major role, as it is the country that imports the most gold. Unfortunately, the gold also causes a lot of problems. In particular, gold mining has a serious environmental and social impact. To get the gold out of the earth you have to mine deep and this changes the whole landscape. Further, very toxic chemicals are used to extract the gold. One of these chemicals is called quicksilver. Even small amounts of quicksilver affect brain and kidney functions, causes cancer and neurological disorders. 40 tons of mercury are required for 40 tons of gold. Approximately 80 tons of quicksilver are needed to win 40 tons of gold. These chemicals pollute the soil and make it sterile. These chemicals contaminate the soil and make it barren.

In Peru, more than 50’000 hectares of the Amazon were destroyed by gold hunters. This corresponds to 93’000 football fields. Furthermore, the habitats of indigenous people are very endangered in Brazil. The habitants of the regions where gold is won, suffer again and again under the bad precautionary measures of the refineries. For example, in June 2000 a truck lost 150 kilograms of quicksilver in a village, located near the mines. Over 1’000 people have been contaminated and they are suffering now from the consequences. People had skin rashes, bleeding, nausea and dizziness. After the accident, there were malformations in new-borns and deaths. In demonstrations against the mining of gold in South America, people are also dying because of the police, who ruthlessly shoot at the demonstrators.

All these problems are also directly related to Switzerland, because as already mentioned, there is no country in the world that imports as much gold as Switzerland (about 2,500 tons annually). Over 75% of the gold is turned into watches and jewelery and the big problem is, that the producers do not give any information about the origin of the gold. It is estimated that 90% of the gold comes from mines that are harmful to the environment and cause social problems in the countries of origin. This gold is called “dirty gold”. [5]

But there is hope, because more and more people are interested in gold that comes from safe mines. A “Fairtrade logo” was also created for this purpose. Another project comes from Switzerland itself and is called the “Better Gold Initiative” and is even supported by the Swiss government. [3][4]

For those interested, the links for the project and an exciting documentary are listed below in our source list.

Leather:
There are various possibilities for the production of a watch strap. Above all, their materials and origin are different. Stainless steel and/or leather Straps are the most common variants. In relation to our example exists the decision between a calf/cow leather or shark leather model. Shark leather is clearly an expensive material, which is also hard to get and definitely not friendly for the environment. Sharks are heavy overfished these days. Especially in Asian countries like Japan, the fishermen really exaggerate this situation. It is definitely true that shark leather isn’t good for the environment, but is cow leather even better? Many people defend this Question by saying that these animals die anyway, because of their meat. Despite all this, leather straps are very beautiful and still popular in many eyes. They are also easy to change and to adjust, which makes them even more user friendly. [6]

A positive aspect for the materials that are needed for a watch is that many of them are recyclable. Many valuable items such as the stainless steel and gold can be melted and then reused to new products. Much more exciting is, that many watches, especially expensive ones, are inherited over decades. For many people, a watch is not only there to read the time, but is also a valuable piece of interest through its history. People are so enthusiastic about the small and accurate technology of a watch that they want to share this enthusiasm with their children and grandchildren. This is the reason why a watch often remains a family possession for decades. 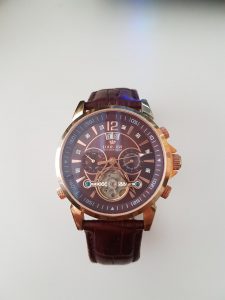 Self taken picture of a watch.

3 thoughts on “Check the watch!”