Gaming was an essential part in our childhood. From starting with a little Gameboy to owning an own PS4, we both had always a heart of a pure gamer. But never asked us, how bad gaming for the environment really is.

That is why we started to make a calculation.

So, due to this calculation, we started to think of ideas, how we can reduce the loss of energy in the production. There are a lot of gamers in this world and a lot of energy must be used to build the game stations, controllers or to handle the servers. Not to forget, a lot of electricity must be used to play games. So, if all the gamers decide to start sharing their game supplements and just play at other times, a lot of energy could be saved and the companies don‘t need to build so much stations.

We found out, that there are two options of sharing games

Sharing function on the PS4. The PS4 is the most popular console in this world and luckily, it has some sort of sharing functions, where two players can share all their games together. It works like that. Every player has an own account and own console. Now, the two players need to log in to the other players console and mark their PS4 as their own PS4.  Like that, the original owner, can download all the games the other player bought. It is some sort of tricking around the system. The problem with this method is, that you can only share downloaded games and not the ones bought on a cd. But that is why we thought of a different method.

Share the Gaming CD’s. First, we thought of sharing the whole console. But not all of us live together with their gaming partner and that is why this method would have taken away a lot of fun. In addition to that, the gamers would not be able to play at the same time.

So, we thought about of buying and sharing games together. This method would save a massive amount of CD’s and a lot of energy would be spared. The only disadvantage would be, that the gamers cannot play the same games at the same time. But if they are anyway only storygame-players, this would not cause any problems.

Either way, both methods would save a lot of energy, as downloading games and burning CD’s uses a huge amount of energy.

So, what did we do? We tried out the sharing function on the PS4 and started to play together. To be honest, we were extremely impressed and overwhelmed. We gave each other our log-in information’s and started to play games TOGETHER, while only one of us bought the games. It did not have any disadvantages, as we both only buy games online and not per CD. The only thing you need here is trust because you give away each other your personal data’s. Luckily in our case, this was not a problem.

So that we have an idea of how much energy we are talking about when it comes to game sharing, we have made the following calculation based on data from Switzerland:

The calculation of how much energy we can save if we would increasingly share video games is as follows: If we assume that 400,000 people in Switzerland use a PS4 or similar and that the download for one gigabyte takes 0.06 kilowatt hours , everyone has an average of 300 GB on their Playstation, the download comes with a power consumption of around 7,000,000 kWh. This does not even include other things as the server’s power consumption for example. We believe that sharing video games could save at least a third. That means we would save about 2’300’00 kWh. By the way: Around 60,000,000 kWh of electricity is consumed in Switzerland each year for video games. And that if you only use the PS4 on average for one hour a day. (Source: Wikipedia.org)

As we can see, gaming uses a lot of energy. Therefore, the question arises for us is how we can optimize energy consumption. The easiest way would be if as many people as possible were doing game sharing. To find out how many people would be interested, we made a short outline. The survey was completed by 100 people between the ages of 12 and 25. We decided that because we think that people of this age are most likely to play video games. The first question was whether the people do game sharing. Here is what came out. We spread our survey on Instagram and Facebook. 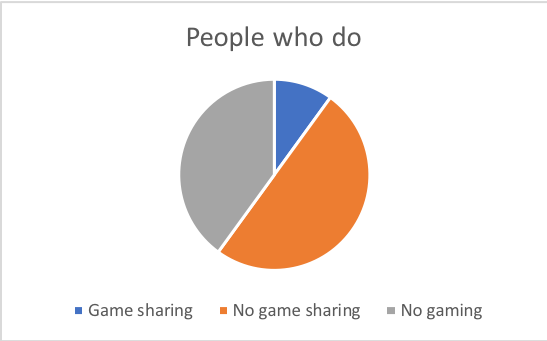 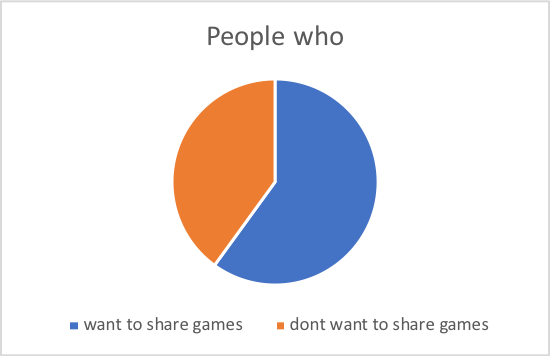 As we can see from this evaluation, 60% of regular video game players want to do game sharing. The rest do not care. However, it was important to us to convince people who were not so motivated. We have two good arguments for this:

In conclusion, this project opened our eyes, as we did not know how much energy we really spend, just to fulfil our game desires. It is so easy to share games and it is so much better for our environment. We hope that we could instigate some gamers out there, to do the same thing we are doing now: Sharing Games. They survey showed us, that most of the gamers did not even think about the idea of sharing games together. We need to start thinking about our environment, not only about our own desires.

Idea of an app

So that game sharing would be easy to practice and you could play a wide variety of games, we suggest the following: It is best if you would create an app in which you can make your game available online. For that, the person who lends the game receives a certain reward, let’s say CHF 2.50 per rental. Now the game can be lent to any person. The only requirement would be that every person has an account in our “online library”. If the game was successfully borrowed, the person who borrowed the game must pay a fee. Let’s say an amount of CHF 5.00 would be needed for this. This includes the reward for the lender and the fee for the “online library”